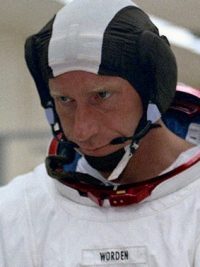 From July 26 to August 7, 1971, Astronaut Al Worden served as the Command Module Pilot for the Apollo 15 mission along with crewmates Dave Scott and Jim Irwin. Al is a two-time world-record-holding astronaut: First for performing the first spacewalk in deep space, and then also for being the most isolated human ever.

Selecting the United States Air Force after graduating from West Point, Al ultimately served as an instructor at the Aerospace Research Pilots School at Edwards Air Force Base, California. As an instructor, he trained some of the men who would later become fellow astronauts.

Al is the author of three books, Hello Earth! Greetings from Endeavour! (a book of his poetry inspired by his flight on Apollo 15), I Want to Know about a Flight to the Moon (a children’s book) and, most recently, his autobiography, Falling to Earth.