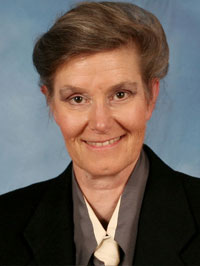 Anita Gale was a Senior Project Engineer in Space Shuttle Payload & Cargo Integration, for The Boeing Company in Houston. Her professional career started on the Space Shuttle program in 1974, for Rockwell International in Downey, California. She provides conceptual designs for cargo integration on future launch vehicles, contributes to R&D for Shuttle upgrades and future missions of both reusable and expendable launch vehicles, and develops and fosters process improvements. She holds three US patents on launch vehicle payload interface standardization and containerization, which are essential technologies for reducing future vehicle processing costs and schedules.

Anita is an active member of two professional engineering organizations, the American Institute of Aeronautics and Astronautics (AIAA) and Society of Women Engineers (SWE). She is a member of the AIAA Space Colonization Technical Committee, regularly chairs technical conference sessions on space settlements, and has written technical papers about space settlement requirements, designs, and the triggering events that will cause space settlements to be built.

Anita earned both a Bachelor of Science and Master of Science in Aeronautics and Astronautics from the University of Washington, and a Certificate in Systems Engineering from Cal Poly Pomona.