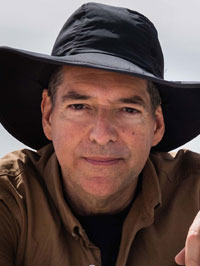 Board of Governors, National Space Society

Board of Governors, National Space Society

Geoffrey Notkin starred in three seasons of the multi award-winning television adventure series Meteorite Men for Discovery networks and two seasons of STEM Journals, for which he received two Emmy Awards. He is an author, world traveler, meteorite specialist, TEDx speaker, CEO of Aerolite Meteorites, Inc., and president of Desert Owl Productions, Inc. He is a television and film producer and his credits include Philip K. Dick’s Radio Free Albemuth, and the documentaries Neil Gaiman: Dream Dangerously, and First to the Moon: The Story of Apollo 8. An award-winning author, Geoffrey has published hundreds of articles on meteorite science, paleontology, astronomy, adventure travel, history, and the arts, with his work appearing in National Geographic, Smithsonian, Astronomy, Astronomy Now, Sky & Telescope, USA Today, Wired, Reader’s Digest, The Village Voice, Seed and many other publications. He is the author of three books including the IPPY Award-winner Meteorite Hunting: How To Find Treasure From Space. His spaceflight column Throwing Pebbles at the Sky is exclusive to the National Space Society magazine, Ad Astra. Geoffrey is a member of The Explorer’s Club, is on the Board of Governors of the National Space Society, the Advisory Board of Deep Space Industries, and the Board of Directors of the Astrosociology Research Institute. The minor planet 132904, discovered at Mount Palomar, was officially named “Notkin” by the Minor Planet Center in recognition of Geoffrey’s contributions to science and education.