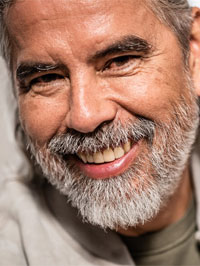 Henk Rogers is perhaps best known for his background in computer gaming and managing the worldwide licensing rights to Tetris, one of the most popular video games in history. Following a near-death experience in 2005, Henk found his missions in life and became interested in environmentalism and space exploration. He aims to make a backup of life by exploring and colonizing other planets.

Henk is the owner of the Hawaii Space Exploration Analog and Simulation (HI-SEAS), which served as a NASA Mars mission test facility for five years. He also serves as the Chair of the Pacific International Space Center for Exploration Systems (PISCES). This organization has been working on lunar ISRU, among other initiatives positioning Hawaii as a leader in space exploration. Recently, PISCES successfully created a lunar concrete out of regolith simulant using only heat to cause sintering and create a material stronger than specialty concrete.

In 2017, Henk funded a gathering of space industry leaders to brainstorm the building of a moonbase. Out of this gathering was born the International MoonBase Alliance (IMA) which now manages HI-SEAS Moon mission simulations. IMA is currently working on the design and construction of the first moonbase.