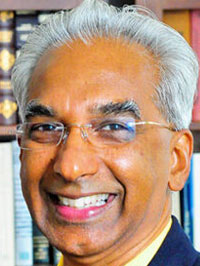 Madhu Thangavelu conducts the graduate Space Exploration Architectures Concept Synthesis Studio in the Department of Astronautical Engineering within the Viterbi School of Engineering at the University of Southern California. He also teaches the Extreme Environment Habitation Design Seminar in the School of Architecture, where he is a graduate thesis adviser.

Mr. Thangavelu’s educational background is in Architecture (Masters in Building Science, USC School of Architecture 1989) and in Engineering (Bachelors in Science and Engineering, National Institute of Technology, Calicut, India, 1980). He is also a graduate of the inaugural summer session of the International Space University held at MIT in 1988. Versions of Madhu’s masters thesis (conceived during ISU ’88 at MIT) entitled “MALEO: Modular Assembly in Low Earth Orbit. An Alternate Strategy for Lunar Base Establishment” were published in several journals worldwide.

At USC, he was mentored by and worked as a research assistant and research associate under Dr. Eberhardt Rechtin, professor of Electrical, Systems and Aerospace Engineering, (while he was creating the Systems Architecting Engineering program at USC), considered the chief architect of NASA’s Deep Space Network and President Emeritus of Aerospace Corp. Since 1992, he is also a creative consultant to the aerospace industry in this newly evolving field of space architectures complex concept synthesis. Mr. Thangavelu’s concepts have been reviewed and appreciated by NASA, the National Research Council, the National Space Council (Bush Sr. Administration), and his work has been presented before the National Academy of Sciences. He continues to present and publish original concepts in Space System Architectures and chairs related sessions at conferences. He is a co-author of the book “The Moon: Resources, Future Development and Colonization“, John Wiley & Sons 1999, and the second Springer/Praxis edition was published in 2007, third edition in preparation.

He is a former Vice Chairman for Education, Los Angeles Section of the American Institute Of Aeronautics and Astronautics (AIAA). He has directed Space Exploration Projects at the California Institute of Earth Art and Architecture. Mr. Thangavelu is also the invited author of the chapter “Living On the Moon” in the Encyclopedia of Aerospace Engineering, a major reference work published by John Wiley and Sons in October 2010, updated in 2012. He was on the team that won the coveted NASA NIAC Phase 1 and 2 awards consecutively for developing robotic building technologies on the Moon and Mars with PI Prof. Behrokh Khoshnevis. Mr. Thangavelu’s concept creation work was greatly appreciated for proposing ideas that pointed to the “leading-edge sensor concept” for return to flight of the space shuttle fleet.