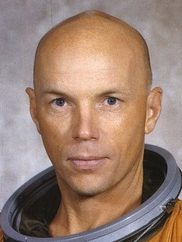 Dr. Story Musgrave was a NASA Astronaut for over 30 years, flew on six spaceflights and has spent a total of 1,281 hours, 59 minutes, 22 seconds in space. He performed the first shuttle spacewalk on Challenger’s first flight, was a pilot on an astronomy mission, conducted two classified DOD missions, was the lead spacewalker on the first Hubble Space Telescope repair mission and operated an electronic chip manufacturing satellite on Columbia. He was the lead communicator in the NASA Mission Control Center for 25 other missions starting with the Apollo/Saturn Skylab missions. He has accumulated over 18,000 hours flying in 160 different civilian, military and NASA aircraft including over 7,000 hours in supersonic aircraft. Dr. Musgrave has 6 graduate degrees in math, computers, chemistry, medicine, biological physics, and literature and has been awarded 22 honorary doctorates. He was a part-time trauma surgeon at the University of Colorado Medical Center for the duration of his astronaut career.