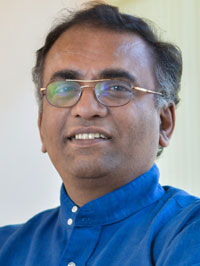 He completed Bachelor of Technology in Electronics & Communication Engineering in 1985; Master of Science in Software System in 2007; and Master of Arts in Russian Language in 1996. He joined ISRO’s Vikram Sarabhai Space Centre (VSSC) in 1987.

Over the years, has made significant contribution to the development of ISRO’s Launch Vehicles. He played key roles in system integration, checkout and avionics of ISRO’s family of launchers viz., PSLV, GSLV & GSLV-Mk III. He has been the Chief Designer (Integration) of major subassemblies including equipment bay of the launch vehicle. He was also the Vehicle Director for the remarkably successful GSLV D5/GSAT-14 Mission with the indigenous cryo stage and served as Project Director, GSLV and Mission Director of the successful GSLV-D6, GSLV F05 & GSLV F09 Missions, which is a hat-trick in GSLV Programme.

He also served as Deputy Director, Avionics at VSSC and in that capacity he led a team of young enterprising Engineers, for the development of miniaturized avionics, performing the crucial role in making key decisions to overcome the various technical intricacies and mitigate developmental constraints in the realization of these systems.

Since August 2018, he is serving as Scientific Secretary, ISRO at its Headquarters, with key roles in the overall Policy, Planning and Programs of ISRO, including international cooperation. He also concurrently leading the programme offices on satellite navigation, space science and planetary exploration and Technology Development and Innovation. He is also leading a High Level Interim Committee in lieu of IN-SPACe to implement the space sector reforms announced by Government of India to enhance participation of private sector in space activities.

He has immensely contributed to ISRO’s international cooperation by serving as the co-chair of Joint Working Groups with many space agencies ROSCOSMOS (Russia) JAXA (Japan); ESA (Europe); NSSA (Bahrain); CRTS & CRERS (Morocco); ASAL (Algeria); CONAE (Argentina); MDAI (Kazakhstan); EgSA (Egypt); He represented India in UNCOPUOS meeting in June 2019 and led the ISRO delegation in APRSAF 2020. He has been elected as the Chair of Working Group on Long Term Sustainability of Space Activities in UNCOPUOS Scientific and Technical SubCommittee. He has been part of Indian delegation to many International Astronautical Congresses. He also signed the Joint Declaration of Interest for Space Climate Observatory (SCO) at Paris in June 2019 on behalf of ISRO.

He has been awarded ISRO Individual Merit Award-2013, ISRO Team Award-2006 (PSLV), ISRO Team Award-2014 (GSLV) and ISRO Outstanding Achievement Award 2018. He also received the Astronautical Society of India (ASI)-ISRO Award for the year 2016. He became a Corresponding Member of International Academy of Astronautics (IAA) in 2019. He is Fellow of Aeronautical Society of India (AeSI), Life Member of Systems Society of India (SSI) and Indian Society for Advancement of Materials and Process Engineering (ISAMPE). He was the National Vice President for Indian Society of Systems, Science and Engineering (ISSE) and currently President of ISSE Bangalore Chapter. He is recipient of Honoris Causa from the Sathyabama Institute of Science and Technology, Chennai (2019).